Certain probiotics have demonstrated significant benefit for maintaining the health of the microbial community in the gut. Lactobacilli have demonstrated the ability to protect the host from pathogenic bacterial strains like Listeria, Salmonella and E .coli.1 Lactobacilli influence immunological and physiological processes in the body.

In a large review of various Lactobacillus species, researchers found Lactobacilli efficacious for the treatment of some cancers, vaginal disorders, hypercholesterolemia, H. pylori, oxaluria, mastitis, atopic dermatitis, allergic rhinitis, constipation and ulcerative colitis, diarrhea, and type 2 diabetes.2 While Lactobacilli as a group have a wide range of therapeutic potential, research indicates that variability among efficacy and adherence to gut mucosa exists between strains. This review focuses on Lactobacillus plantarum 299v (LP299v) and gut function specifically.

Lactobacillus plantarum 299v (LP299v) has demonstrated regulatory action on genes modulating various activities, including inflammation in pig intestine.3 LP299v is a probiotic Lactobacillus strain capable of adhering and thriving in the human colic mucosa in part because of its mannose adhesion ability. The inaccessibility of the human small intestine, where probiotic action is occurring, makes studying interactions there difficult. Researchers used pig intestine in place of human intestine to study gene modulation.3

Oral administration of 5×1012 CFUs LP299v influenced immunological processes in the ileum, including increased expression of B cell specific transcription factors, leading to an increase in B cell migration from periphery to the ileum. B cells may also mature to IgA pplasma cells and migrate to the lamina propria when LP299v is introduced. LP299v also seemed to regulate the expression of CD4+ lymphocytes, CD14+ monocytes, adipocytes, in addition to B cells.3

Crosstalk between submucosal adipocytes and intestinal immune cells resulting in blunting of inflammatory reactions was also observed. An example of this reduction in inflammatory response is seen with LP299v ability to regulate the production of adenosine by T-cells.3  Decrease in NF-KB mediated transcription was also seen suggesting prevention of inflammation in the pig ileum. Researchers also noted signs of significant difference in genetic variation existed among the pigs indicating the need for future research in this area.

These results strengthen the hypothesis that probiotic interventions can be beneficial for symptoms reduction during antibiotic treatment protocols. LP299v appears to excerpt its effect by decreasing bacterial translocation, modulating the intestinal epithelial inflammatory response, and inhibiting bacterial adhesion. These results suggest that LP299v may reduce symptoms associated with gut dysfunction, including irritable bowel syndrome (IBS), and adverse gastrointestinal symptoms related to antibiotic exposure. These results suggest the need for larger clinical trials investigating the potential positive effects of LP299v on gastrointestinal function.

Lactobacillus has been studied for its efficacy for a variety of gut related dysfunction. Researchers discovered that in patients with IBS who fulfilled the Rome II criteria, intervention with LP299v caused significant improvement in IBS-related symptoms over the 4-week trial period when compared to placebo.5 Abdominal pain decreased in frequency and intensity, bloating and sensation of incomplete evacuation also decreased with LP299v ingestion.5 Since IBS is one of the most common digestive tract disorders, implementation of this specific strain of probiotic may offer significant symptom relief for patients with IBS.

Probiotics offer significant therapeutic clinical application for a wide range of conditions. Researchers are breaking ground on understanding how the various strains of Lactobacillus, and other probiotics can have a positive impact on human health. The LP299v strain shows strong potential for supporting gastrointestinal function via its ability to modulate gene activity, decrease inflammation, prevent pathogenic bacterial colonization, and reduce the intensity and duration of IBS symptoms. With its broad range of gut function specific influence, LP299v seems like a promising strain of Lactobacillus, and more research and clinical applications for this specific strain with relation to gut health and function are certainly warranted. 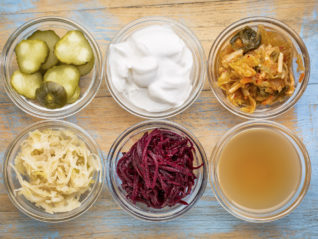