Introduction
Large-scale epidemiological analyses have found an inverse association between intake of cruciferous vegetables (e.g., broccoli, cabbage, cauliflower and Brussels sprouts) and risk of cardiovascular disease, some cancers, and all-cause mortality.1,2 Cruciferous vegetables are a rich source of a variety of bioactive compounds, including sulfur-containing phytochemicals known as glucosinolates.3 Glucosinolates may have evolved as a form of defense; when a glucosinolate-containing plant is mechanically damaged (e.g., by chewing), the molecule is exposed to and subsequently hydrolyzed by the enzyme myrosinase. The resulting breakdown products include isothiocyanates, thiocyanates, and epithionitriles, many of which have been evaluated for their bioactivity.4 One particularly interesting hydrolyzed product is indole-3-carbinol (I3C).3 I3C has been found to have numerous biological activities, including effects on cell division, angiogenesis, and hormone metabolism.5

I3C is an unstable compound in acidic conditions and undergoes rapid oligomerization to form a mixture of acid condensation products, with 3,3’-diindolylmethane (DIM) being the predominant compound.6 However, human feeding studies reveal that, after subjects ingest I3C, DIM is the only detectable I3C-derived compound in plasma.7 Scientists believe that many of the biological effects of I3C are attributable to DIM.

As a dietary ingredient, DIM is poorly absorbed from the gastrointestinal tract due to its lipophilic property.8 However, certain technologies have been applied to DIM to help improve its bioavailability.9 The absorption-enhanced DIM has been evaluated for its effects in several human studies.10-13

Research Highlights
• Cruciferous vegetables are a rich source of glucosinolates, which are broken down into bioactive metabolites by the plant enzyme myrosinase. One of the metabolites with therapeutic interest is I3C.3
• Human feeding studies demonstrate that I3C is rapidly converted to DIM, the only detectable I3C-derived compound in plasma.7
• Both I3C and DIM exert various biological activities, such as:2,14-18

Modulation of biotransformation
Biotransformation enzymes play an important role in the metabolism and elimination of not only numerous endogenous compounds but also exogenous compounds including environmental carcinogens and toxins.19 I3C and DIM have been demonstrated to bind to the transcription factor aryl hydrocarbon receptor (AhR), allowing AhR to enter the nucleus to form a complex with xenobiotic response elements (XREs) of target genes. This leads to upregulation of genes that contain XREs, including genes of phase I (CYP) and phase II biotransformation enzymes.14 I3C and DIM have also been shown to bind to the nuclear factor erythroid 2-related factor 2 (Nrf2), resulting in activation of the Nrf2 signaling pathway and upregulation of genes for phase II biotransformation enzymes and antioxidant enzymes.15

Modulation of estrogen metabolism
Via cytochrome P450-dependent pathways, endogenous estrogens such as 17β-estradiol (E2) and estrone (E1) are irreversibly converted to two major metabolites: 2OHE1, which is believed to have anti-estrogenic effects,20 and 16αOHE1, which has been shown to induce abnormal cell proliferation.21 I3C and DIM upregulate genes for CYP enzymes that result in increases in 2OHE1 at the expense of 16αOHE1.16 It has been proposed that a higher ratio of 2OHE1 to 16αOHE1 (2:16 ratio) indicates a shift in metabolic pathway toward 2OHE1 from the 16αOHE1 and may be associated with reduced risks
of estrogen-sensitive cancers.22

• In several cancer cell lines, pretreatment with DIM has been shown to inhibit NF-κB activity, leading to inhibition of cell growth and induction of programmed cell death.2,18
• I3C and particularly DIM inhibit angiogenesis via inactivation of ERK1/2
and/or Akt signaling in endothelial cells.17 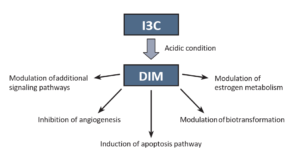 Clinical evidence of I3C and DIM