How Specific Strains of Lactobacilli and Bifidobacteria Work Together

Probiotics have a long history of safe1 and effective use, with clinical studies demonstrating strainspecific effects on specific conditions.2 The early identified probiotic Lactobacillus acidophilus NCFM® (L. acidophilus NCFM) has been used in foods and supplements since 19703 and has demonstrated clinical efficacy alone and even more so with other strains. Lactobacillus rhamnosus GG (L. rhamnosus GG) is one of the most widely studied lactobacilli, patented in 19894 and has been widely adopted for acute gastroenteritis in children.4–7 These strains as well as others highlighted here can work together in particular dose and strain combinations to impact gut microbiota, gastrointestinal (GI) function, and immune function. Probiotics have a long history of safe1 and effective use, with clinical studies demonstrating strain-specific effects on specific conditions.2 The early identified probiotic Lactobacillus acidophilus NCFM® (L. acidophilus NCFM) has been used in foods and supplements since 19703 and has demonstrated clinical efficacy alone and even more so with other strains. Lactobacillus rhamnosus GG (L. rhamnosus GG) is one of the most widely studied lactobacilli, patented in 19894 and has been widely adopted for acute gastroenteritis in children.4–7 These strains as well as others highlighted here can work together in particular dose and strain combinations to impact gut microbiota, gastrointestinal (GI) function, and immune function.

The mechanism of action of probiotics are complex and differ by strain. Mechanisms of action described below were determined through preclinical research unless otherwise indicated. 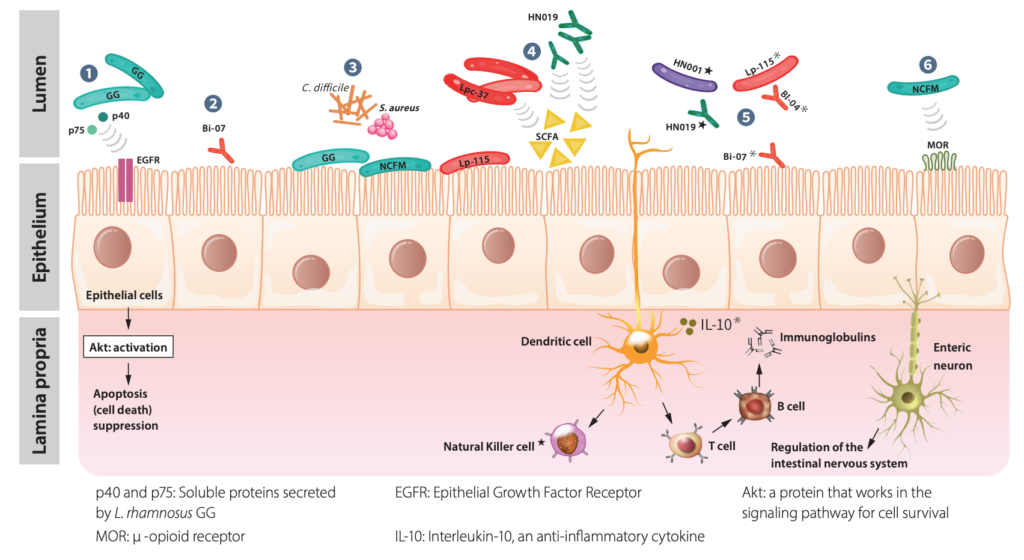 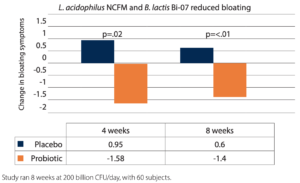 Constipation: In a RCT of 100 adults, a 30-50% reduction in whole gut transit time was achieved with 1.8 and 17.2 billion CFU Bifidobacterium animalis subspecies lactis HN019 (B. lactis HN019) as shown in the graph below. Consumption of B. lactis HN019 led to a reduction in constipation, irregularity, and flatulence about two times greater than the placebo.10 When B. lactis HN019 was added to L. acidophilus NCFM, B. lactis Bi-07, Bifidobacterium animalis subspecies lactis Bl-04 (B. lactis Bi-04), and Lactobacillus paracasei Lpc-37 (L. paracasei Lpc-37) (the four-strain combination was cited by the World Gastroenterology Oraganisation’s Global 2017 guidelines for antibiotic-associated diarrhea7 ), the five-strain combination showed a statistically significant reduction in flatulence. In addition, less digestive discomfort was observed. The treatment included consumption of the combination for two weeks for a total of 156 constipated people in the RCT.11

When combining multiple strains of probiotics for health benefits, even though each strain has a demonstrated health benefit and has been safely consumed, the combination may behave differently. The eight strains in these studies were combined together into a unique and novel combination. An IRB-approved clinical study on the combination resulted in no serious adverse events and no withdrawal of participants.

The possible mechanism may be that acetate produced by the lactobacilli28 and bifidobacteria29 may encourage the growth of Faecalibacterium prausnitzii. F. prausnitzii produces butyrate as a metabolite, which supports the growth of intestinal goblet cells, which produce mucin, a food source for Akkermansia muciniphila.30 These two cohabitants of the intestinal mucosa are lower in many disease conditions of the intestine associated with metabolism and inflammation.31, 32 Additional research on this novel multi-strain combination is warranted to evaluate published benefits on the strains as well as how these strains work together to provide additional benefits.

L. acidophilus NCFM, B. lactis Bi-07 and Bl-04, and L. paracasei Lpc-37 at 17 billion CFU reduced antibiotic-associated symptoms by more than 50% fewer days of diarrhea and more than 80% less bloating and abdominal pain in a large RCT. Clostridium difficile-associated diarrhea was significantly lower (p=0.02) comparing the high dose group to the placebo group. The capsule was taken two hours after the antibiotic and breakfast. Probiotic usage continued one week after the antibiotic course completed.12 A meta-analysis of probiotics concluded that in general, probiotic use was associated with an 8% reduction in relative risk of developing a cold.14 In particular, 2 billion CFU B. lactis Bl-04 was found to reduce risk of a cold by 27% (with statistical significance), while the combination of L. acidophilus NCFM and B. lactis Bi-07 also reduced the risk (19%) compared to placebo in a RCT of healthy, active adults.15

Vaccination can be improved with adjuvants, which are additional components that may help stimulate the immune response to the offending compound (antigen). Probiotics have been tested in vitro for their ability to modify the immune system and therefore are potential candidates to help with improving the efficacy of vaccination. Measuring serum and salivary immunoglobulins may be an indicator of immune response. Specifically, IgG is involved in immune memory.

A study evaluated the changes in immunoglobulins, various proteins that act as antibodies in the immune system response, in blood as well as in saliva in response to one of seven probiotic strains (20 billion CFU each) or a placebo. In this eight-arm RCT using probiotic consumption over three weeks during two vaccinations, B. lactis Bl-04 was one of two strains that showed a significant change to serum IgG; Lactobacillus plantarum Lp-115 as well as B. lactis Bi-07 also increased serum IgG compared to placebo although the changes were not significant.20

Some evidence has shown that L. rhamnosus GG demonstrated improved tolerance to milk in children with a milk allergy.21–23 In young adults with birch pollen and apple allergies, a RCT tested consumption of 20 billion CFU per day of L. rhamnosus GG for five and a half months during the birch pollen season. The probiotic-treated group was shown to stimulate secretion of birch pollen and apple-specific IgA.24 Increases in allergen-specific IgA levels suggest support for an immune response that tolerates the allergen.25 In a randomized, double-blind placebo-controlled trial, 120 healthy adults between the ages of 18 and 25 consumed either the probiotic L. paracasei Lpc-37 or the placebo once daily for 5 weeks and took the Trier Social Stress Test (TSST) before and after the intervention. Participants who received Lpc-37 reported significantly lower perceived stress levels compared to the placebo group by the end of the study (p=0.048).26