Mechanism of Action (MOA)
In vitro studies demonstrate that L. rhamnosus GR-1 and L. reuteri RC-14
have an ability to interfere with the growth of bacterial and fungal
pathogens, adhesion to uroepithelial cells, and adhesion to surfaces
made of the same substrates used to create urinary devices which are
known to increase the risk of UTI.6 Additionally, studies have shown
L. rhamnosus GR-1 to reduce colonization of the vagina by Gram-negative
pathogens in humans,7 while L. reuteri RC-14 produces biosurfactants
that reduce surface tension and adhesion by pathogenic bacteria and
Candida albicans.8

Efficacy of oral L. rhamnosus GR-1 and L. reuteri RC-14
in otherwise healthy women diagnosed with BV
During a multi-center, six-week study of 544 adult women, ages 18 to 58
with vaginal infection, participants received 1 billion CFU each GR-1/RC-14
or two placebo capsules daily. At the study conclusion, 61.5% in the probiotic
arm experienced restitution of balanced vaginal microbiota, compared
with 26.9% in the placebo arm.3 Additionally, at six weeks post-trial, normal
vaginal microbiota were still present in 55.1% in the probiotic arm, but only
20.8% in the placebo arm.2 (Figure 2) L. rhamnosus GR-1® and L. reuteri RC-14® vs. Trimethoprim-sulfamethoxazole
for prevention of UTI

GR-1/RC-14 and Trimethoprim-sulfamethoxazole (TMP-SMX) were administered in a double-blind, double-dummy, non-inferiority study of 252 postmenopausal women with recurrent UTIs. The women were randomized to one capsule containing 1 billion CFU GR-1/RC-14 twice daily, plus one placebo tablet at night, or one placebo capsule twice daily, plus one tablet containing 480 mg TMP-SMX at night. While a large reduction of UTIs was seen in both groups after a 12-month duration with three months followup (Figure 3), the group receiving GR-1/RC-14 treatment had a lower prevalence of E. coli harboring antibiotic-resistant genes compared to the antibiotic group.4 (Figure 4) 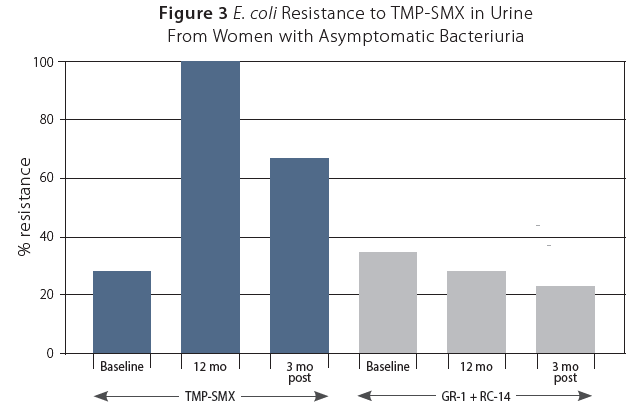 In a randomized clinical study of 55 women, ages 16 to 46 with diagnosed
vulvovaginal candidiasis (VVC), either a single 150 mg dose of Fluconazole was administered with GR-1/RC-14 (1 billion CFU each), or placebo two capsules daily from day one through 28. At conclusion of the study, the probiotic group showed significantly less vaginal discharge (10.3%) compared with the placebo group (34.6%). The probiotic group also showed significantly lower presence of Candida (10.3%) compared with the placebo group (38.5%).5 (Figure 5) Conclusion
The probiotic combination of L. rhamnosus GR-1 and L. reuteri RC-14 is safe
and effective to use both on its own and with conventional therapeutic
options for urogenital health. This includes demonstrated effectiveness in
the maintenance of healthy vaginal microbiota by increasing the number
of beneficial lactobacilli, as well as a lowered risk of BV and augmentation
of antibiotic treatment efficacy against BV and yeast vaginitis. In addition,
long-term use of the probiotic may help reduce the occurrence of antibiotic-
resistant E. coli in the urine.