The health and lifestyle choices a mother makes during pregnancy has immense impact on the unborn child during in-utero development and beyond.  It is well known that drinking alcohol during pregnancy can lead to fetal alcohol syndrome; taking certain medications such as isotretinoin, a common acne drug, can lead to birth defects; and consuming inadequate quantities of folate while pregnant can increase risk of spina bifida and other mid-line defects in the child.

Ingesting inappropriate types and quantities of medications, drugs, foods and beverages in addition to other environmental exposures during pregnancy have the potential to harm the unborn child leading to miscarriage, birth defects and, as more recent literature has found, can increase risk factors associated with obesity,1 cardiovascular disease and diabetes potentially impacting the child into their adult years.

One area that has come under scrutiny more recently is how a mother’s dietary habits impact her unborn child not only during in-utero development and directly after birth, but into mid-childhood, adolescence and into the adult years and beyond. A prospective prebirth cohort study published in Pediatrics aimed to examine the association between consumption of sugar sweetened beverages (SSBs) during pregnancy with the adiposity in these children during mid-childhood (median age of 7.7 years).2

This study utilized mother-child pairs participating in the prebirth cohort study Project Viva between the years 1999 and 2002.  Overall, the sample size used for analysis was 1078 mother-child pairs all of whom participated in study visits during the first few days after delivery, during infancy (median age of 6.3 months), early childhood (median age of 3.2 years), and mid-childhood (median age of 7.7 years). In addition, mothers completed mailed questionnaires at 1, 2, 4, 5, and 6 years of age of their child.2

It was found that mother’s with higher consumption of SSB during the second-trimester of pregnancy also had the following characteristics:2

This study reinforces the findings that prenatal programming affects susceptibility to obesity in offspring. The implications of this includes further public health measures to educate mothers on the importance of their dietary habits during pregnancy, particularly during the second trimester. Dietary choices during pregnancy may be an approach that could help stem the tide of childhood obesity.1-2 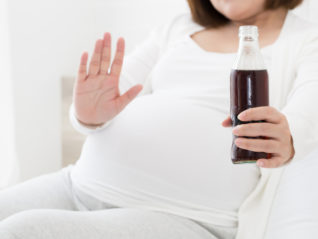