Dementia has become one of the major causes of disability and dependency in older people and is considered a worldwide public health priority.1 According to the World Health Organization (WHO), 50 million people globally suffer from this cognitive decline syndrome, with nearly 10 million new cases occurring annually.1 Although common in today’s society, dementia is not a guarantee, nor a normal part of the aging process. It typically affects older adults leading to symptoms associated with “memory, thinking, orientation, comprehension, calculation, learning capacity, language, and judgement,” leading to potential physical, psychological, social and economic impacts on the individual, their family, and society as a whole.1

Dementia includes a variety of brain disorders each with a slightly different pathophysiology and presentation. Alzheimer’s disease (AD) is the most common form of dementia accounting for 60-80% of all cases. Vascular dementia (VD) is the 2nd most common form and accounts for 10% of cases, while the remainder of dementia diagnoses make up all other cognitive decline conditions including dementia with Lewy bodies, mixed dementia, frontotemporal dementia, Creutzfeldt-Jakob Disease, Huntington’s disease, and normal pressure hydrocephalus.2

With these alarming numbers, researchers are turning their attention to elucidate potential causative factors. A systematic review found that approximately 1/3 of all AD cases may be associated with modifiable lifestyle factors and, “might be reduced through improved access to education and use of effective methods targeted at reducing the prevalence of vascular risk factors (i.e., physical inactivity, smoking, midlife hypertension, midlife obesity, and diabetes) and depression”.6

Environmental factors are also taking center stage in understanding the root causes of dementia. Air pollution has been linked to dementia-related outcomes potentially due to the exposure to nitrogen dioxide (NO2) and high density of fine particles frequently found near major roads.7-9 In fact, it is estimated that up to 6.1% of dementia cases may be attributed to elevated air pollution levels.7-9 Traffic noise and noise pollution may also contribute to a significant number of cases.10

To learn more about the incidence of dementia related to residential levels of air and noise pollution in London, a retrospective cohort study using primary care data from 75 Greater London practices was conducted. Participants included 130,978 adults aged 50-79 years old with no history of dementia nor use of a residential care home.4

During the follow-up period of 8 years from 2005-2013 (average: 6.9 years) it was found that a total of 2181 patients (1.7%, incidence rate of 2.4 per 1000 per year) were diagnosed with dementia.4 Categorically, 39% were diagnosed with AD, 29% with VD, and 34% with a non-specific Read code (the standard clinical terminology system GPs use in the UK); 2.2% were diagnosed with both AD and VD.4 Similar to earlier reports, this study found new dementia diagnoses positively associated with levels of NO2 and particulate matter with a median aerodynamic diameter < 2.5µM (PM2.5).4 The associations between dementia and these elevated pollutant levels were most positively associated with the diagnoses of AD and non-specific diagnoses, such that individuals in the top 5th  exposure category for NO2 had the highest risk of AD diagnosis when compared to those in the bottom 5th of exposure levels.4 It was further seen that all pollutant levels, except for ozone (O3), declined with increasing distance from major roads, while nighttime noise levels were higher the closer one lived to major roads.4

According to the study’s analysis, the associations could not be explained by confounding and were found to be consistent within subgroups.4 There were, however, study limitations. One weakness is the lack of information surrounding the participants’ cumulative lifetime exposures to dementia-associated risks including, not just the immediate London air pollution, but pollution exposure from other locations that these individuals may have lived or been exposed to over their lifetime, as well as other modifiable lifestyle related factors unaccounted for in this study.4 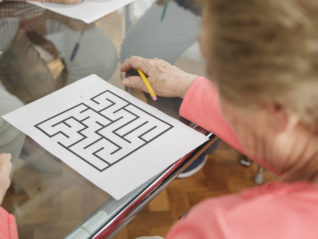