Summary of a Recent Study Menopause can be a serious disruption to a woman’s life. For decades, women and their doctors have turned to hormone replacement and nonhormonal therapies to seek relief. Many women prefer not to take hormones, or for various reasons hormones present a specific health risk, taking them off the table for therapy. A plant extract (ERr 731), made from Siberian rhubarb (Rheum rhaponticum) has been in use for treating menopause in Europe since the 1990s and is now gaining momentum in the global market.

ERβ activation…is linked to preventing depression, anxiety, and hot flushes that are often seen in menopause.2-4 This animal study added to the evidence demonstrating ERr 731 acts as a selective ERβ agonist.1

In a 2021 animal study researchers sought to demonstrate some of the physiological effects from ERr 731.1 Studies in humans can present limitations in what can be controlled and measured, so animal studies can help reveal effects that are difficult to find in human subjects. Even though ERr 731 has been studied for menopause symptoms in randomized placebo-controlled trials in humans, there is the possibility that the reduction in symptoms, such as hot flushes, could be due to psychological, rather than physiological responses, and that’s what researchers sought to find out.1-3

This animal study ran a variety of tests and experiments, and here we’ll get into some of the most interesting learnings that came from it. In the experiments researchers removed the ovaries from rats, they then gave estradiol (E2) or ERr 731 in varying concentrations.1 They measured blood in the rats to ensure the ERr 731 was absorbed.1

In this study, they showed ERr 731 by itself could attenuate the change in skin temperature in ovariectomized rats, to a degree similar to E2 administration, meaning both could control hot flushes.1 The researchers also demonstrated after stopping E2, giving ERr 731 could maintain skin temperature as well as E2. These results suggest that ERr 731 has similar effects on skin temperature as hormone replacement.1

Estrogen has two subtypes of receptors: estrogen receptor subtype alpha (ERα) and estrogen receptor subtype beta (ERβ).1-3 In humans, depending on the tissue, one class of receptor may predominate (see figure). This is important, as the negative effects such as endometrial hyperproliferation (building up of the uterine lining) from estrogen receptors is tied to activation of the ERα.4 And since E2 strongly activates both ERα and ERβ, some menopausal women are not good candidates for traditional hormone replacement therapy because of the negative effects from ERα activation.1 ERβ activation, on the other hand, is linked to reduced depression, anxiety, and hot flushes that are often  seen in menopause.2-4 This animal study added to the evidence demonstrating ERr 731 acts as a selective ERβ agonist.1 Previous studies have shown ERr 731 has this ERβ agonist effect, without affecting ERα effects in human endometrial cells.5 This means ERr 731 would likely be a viable alternative for women who want to avoid the negative effects from ERα activation (from E2), because ERr 731 doesn’t strongly activate the ERα but does strongly activate Erβ (see figures below), meaning ERr 731 does not carry the same risk as E2.1 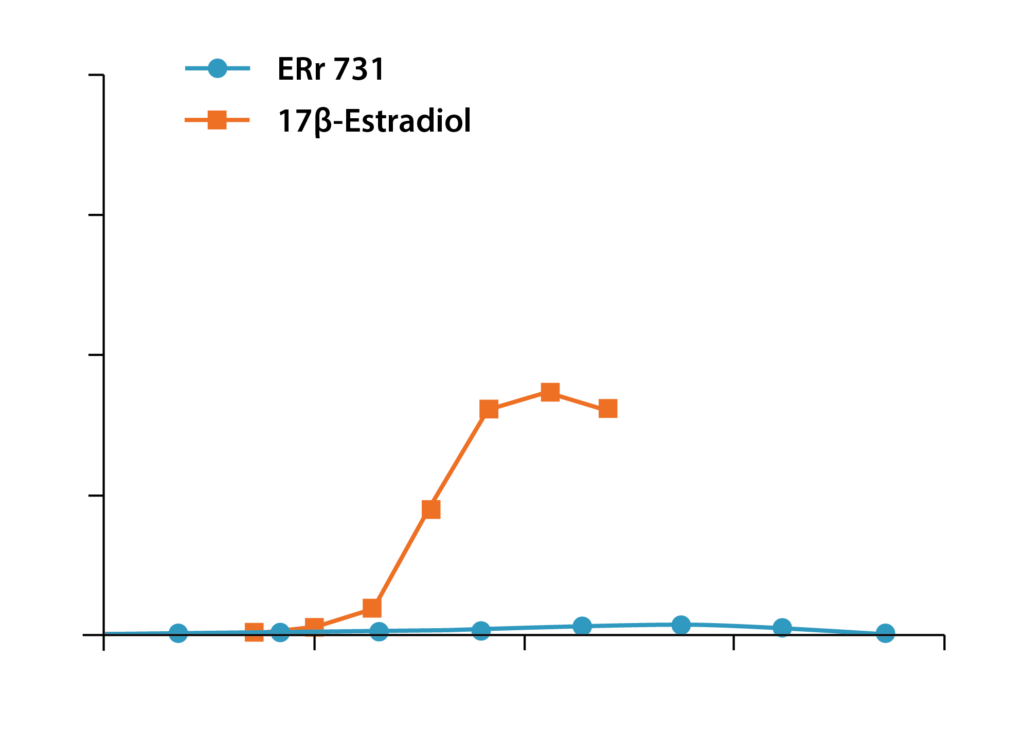 A major finding of this animal study was that it strongly suggests the benefits observed in the previous randomized placebo-controlled studies of ERr 731 in menopausal women are likely due to actual physiological alleviation of hot flushes, rather than a placebo response. This study also demonstrates that ERr 731 acts as a selective ERβ agonist. This mechanistic action means ERr 731 can be an effective option to hormone replacement for menopausal symptoms. To find out more about ERr 731, check out our in-depth Research Review of ERr 731 here.