Can Lean Red Meat Fit into a Heart-Healthy Mediterranean Diet? 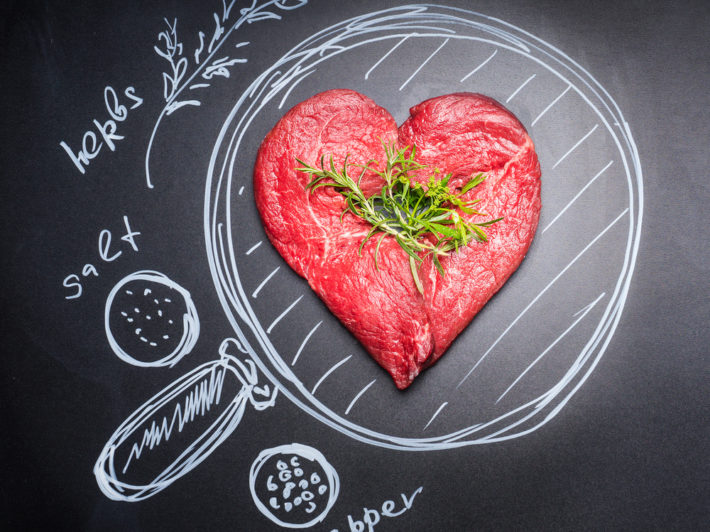 A Mediterranean diet, which emphasizes predominantly plant-based foods, less red meat, and using olive oil as the main source of fat, is known for its health-promoting properties.1 However, the 21 countries that border the Mediterranean Sea are ethnically and culturally diverse; therefore, a Mediterranean diet is not one eating pattern but can vary in its execution from country to country. For example, Spaniards on average consume more red meat than Greeks.2

In this study, 41 adults who were overweight or obese were provided with a Mediterranean diet for two 5-week interventions, separated by a 4-week washout period during which participants resumed their habitual diet.4 The difference between the two intervention periods was the amount of unprocessed lean red meat: one diet contained 500 g/week, reflecting the typical amount consumed by US residents; the other diet contained 200 g/week, an amount commonly recommended in heart-healthy eating patterns. Small adjustments were made to keep total energy and macronutrient ratio identical between the two feeding periods. Various cardiometabolic biomarkers were assessed at baseline and post-intervention.

The results showed that (1) both interventions reduced total cholesterol, but the reduction was even greater with 500 g/week red meat; (2) LDL cholesterol decreased with 500 g/week red meat but was unchanged with 200 g/week red meat; (3) blood pressure was improved with both interventions; (4) other risk factors were not affected by either intervention; and (5) Framingham Heart Study 10-year cardiovascular disease risk decreased by 1%, and vascular age increased by 2-3 years with either diet.4 The authors concluded that eating unprocessed lean red meat in a Mediterranean dietary pattern still improved cardiometabolic risk factors.4

… Or should they? The research study was not only funded by two grants from the National Institutes of Health but also by the National Pork Board and National Cattlemen’s Beef Association, two agencies that promote consumption of pork and beef, respectively. Research collaborations between academia and industry are not uncommon, and the involvement of industry does not equate bias. These organizations had no role in the design and implementation of the study, in the collection and interpretation of the data, or in the writing of the manuscript. Still, it is worth seeing and evaluating the bigger picture. For example, the study biomarkers were assessed after 5 weeks of feeding. But what about long-term effects of consuming red meat? What about long-term, hard clinical endpoints such as incidence of type 2 diabetes, atherosclerosis, or even colorectal cancer? What about all-cause mortality? These are relevant questions that cannot be answered by one short-term clinical trial, even by a well-designed one.

For additional context, a meta-analysis based on three cohort studies of US adults (with over 4 million person-years of follow-up) estimated that both unprocessed and processed red meat intakes were linked to higher risk of type 2 diabetes, and substituting one serving/day of nuts, low-fat dairy, and whole grains in lieu of one serving/day of red meat potentially reduced the risk of type 2 diabetes by 16-35%.5 Two other meta-analyses of long-term observational studies also reported increased risks for stroke and coronary artery disease with higher intakes of either unprocessed red meat, processed red meat, or total red meat.3,6

These meta-analyses provide different perspectives on the link between consumption of red meat and health. It doesn’t mean that the aforementioned, short-term controlled feeding study provided less valuable or misleading information. It was conducted to investigate a specific question—and answered elegantly by a robust research method. But for a consumer, it is important to understand the complexity involving human diet and the study of its impacts. One study isn’t sufficient to help make informed clinical decisions.

Dr. Lewis Chang is Scientific Editorial Manager of R&D at Metagenics. Dr. Chang received his PhD in Nutritional Sciences at University of Washington, along with his MS in Nutrition and Public Health from Teachers College, Columbia University and BS in Pharmacy from National Taiwan University. Prior to joining Metagenics, he conducted dissertation research and completed a research assistantship and postdoctoral fellowship at the Fred Hutchinson Cancer Research Center in Seattle, WA. Dr. Chang has authored or co-authored and managed the publication of over 30 peer-reviewed journal articles and numerous scientific abstracts and posters. He has quite a green thumb, enjoys opera, theater and jazz, and loves cooking, collecting art, and learning to play gypsy jazz guitar.