What we know about Cannabis sativa and cannabinoid-based therapies Cannabis is a booming growth industry. As cultural attitudes evolve, prevalence of consumption is rising exponentially. You may wonder if our knowledgebase regarding cannabis is based on best evidence or interest-driven pseudoscience. Meanwhile, many medical conferences now offer a cannabis track, as education channels scramble to catch up to demand. Perhaps you are curious about the emerging role of the endocannabinoid system and if it is safe to recommend hemp oil, or to prescribe cannabidiol (CBD) or tinctures of CBD and tetrahydrocannabinol (THC, the compound responsible for psychoactive effects). Most patients utilize cannabis for its anti-anxiety, anti-inflammatory, and antioxidant benefits, some for medicinal, and others for recreational purposes. Scientists and policy leaders commonly believe that cannabis is safer and less toxic than alternatives, including alcohol, opioids, and benzodiazepines. Yet the history of the cannabis policy in the United States reflects politics colliding with science, with one researcher in particular enduring the challenges with great rigor and thereby moving forward our scientific understanding. So how do scientists study the vast endocannabinoid system when the primary source of the compounds that interact with this system belong to a controversial plant?

That’s what noted researcher Dr. Daniele Piomelli has wrestled with over his entire career. He is a Professor of Anatomy and Neurobiology at the University of California Irvine School of Medicine and the Louise Turner Arnold Chair in Neurosciences. He holds joint appointments in Biological Chemistry and Pharmacology. Dr. Piomelli is the Editor-in-Chief of the Cannabis and Cannabinoid Research journal. Importantly, he is Codirector of the UCI’s Center for the Study of Cannabis, a multidisciplinary research center whose mission is to address the medical, legal, and cultural challenges posed by cannabis legalization.1

Dr. Piomelli is an expert in neuroscience, pharmacology, and the endocannabinoid system who trained in the laboratories of Nobel Prize-winning scientists Eric Kandel (Columbia University, where he received his PhD in 1988) and Paul Greengard (Rockefeller University). He earned his Pharmacology Doctorate from the University of Naples in 1982, at a time when cannabis of any kind was illegal, including THC, CBD, and even hemp.

“We are committed to translating scientific answers into sound public policy,” states Dr. Piomelli in an op-ed from the Los Angeles Times in December 2017, cowritten with UCI Center for the Study of Cannabis Codirector and Professor of Law Bob Solomon. “Without research conducted under rigorous scientific standards, we will not find answers.”2 For decades, Dr. Piomelli has believed that “if science does not fill the knowledge void, then interest-driven pseudoscience will.”

Starting in 1937 with the Marijuana Tax Act, the United States has regulated and restricted the sale and use of Cannabis sativa.3 The American Medical Association opposed the act because it taxed physicians prescribing cannabis, as well as pharmacists and medical cannabis growers and manufacturers.

Since 1970, access to cannabis was completely banned in the United States by the Controlled Substances Act.4 Federal law did not differentiate between hemp and other cannabis plants—all were effectively illegal, even though hemp was a distinct variety of Cannabis sativa cultivated for its fiber and seeds. Unlike marijuana, hemp contains a tiny fraction of THC, in the range of less than 0.3 percent.5 Put another way, hemp cannot get a person high.

What’s changed most recently in cannabis policy is the 2018 Farm Bill, which passed Congress last year and was signed into law by the President on December 20, 2018.6 Much of the new Farm Bill wasn’t new, but its effect on hemp oil production was. The new Farm Bill drastically transformed policy on industrial hemp production, making hemp legal in the United States at the federal level. As of 2019, at least 33 states and the District of Columbia have legalized cannabis for medical use, and 10 states and the District of Columbia have legalized cannabis for recreational use. But whether the number is 10 or 33 or 50, we know that cannabis is more widely available, and as practitioners, we need to understand the science of the endocannabinoid system and the potential uses of cannabis and cannabinoids for health and the treatment of disease.

Recently, Dr. Piomelli was invited by nutrition scientist Elnaz Karimian Azari, PhD to lecture on the endocannabinoid system, and to discuss his valuable insight on Cannabis sativa and cannabinoid-based therapies.

Dr. Piomelli’s presentation covered the history of studies on the cannabis plant, which led to the discovery of the endocannabinoid system. He shared the outcome of the National Academy of Sciences, Engineering, and Medicine (NASEM) report on cannabis, where he, along with other expert members of the panel, reviewed 24,000 primary studies from 1999-2016 on the therapeutic effects and health risks associated with cannabis and cannabinoid use.7 The report describes more than 100 conclusions, and the three with the most robust evidence are the following.

There is conclusive or substantial evidence that cannabis or cannabinoids are effective:

He finished his talk on molecular mechanisms by underlying the interaction of active compounds in cannabis with the endocannabinoid system.

Here at Metagenics Institute, we are committed to bringing you cutting-edge information and education from leading researchers in their fields so that you receive the most up-to-date scientific information and perhaps are positioned ahead of developments so that you can make sound decisions. Over the next few months, we will be publishing comprehensive, scientifically robust, and practical articles on the role of the endocannabinoid system in inflammatory homeostasis, what the 2018 Farm Bill means for you vis-à-vis hemp oil and other bioactives, as well as the best evidence on cannabis for therapeutic categories such as pain, multiple sclerosis, and anxiety.

Nikky Contractor, PhD earned her PhD in Immunology from the University of Pennsylvania where she studied the role of gut microbiota in models of inflammation, and the function of the intestinal immune system. She continued these research interests as a postdoctoral research fellow at the National Institutes of Health in Bethesda, MD. Dr. Contractor has led academic and industry research programs across preclinical to clinical research with over 10 years of experience in the development of nutritional products to meet the health goals of individuals. In her spare time she enjoys playing ultimate frisbee and hanging out with her husband and twin daughters. 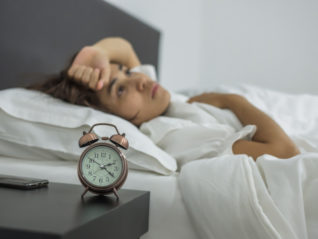 3 Reasons Lack of Sleep May Cause Weight Gain