The Epigenetic Influence of the Mediterranean Diet 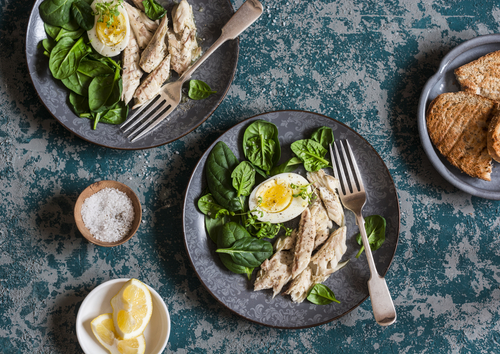 Relatively little attention has been paid, however, to the genetic underpinnings and mechanisms that make the Mediterranean dietary pattern effective. Also termed nutrigenomics, the interaction of nutrient intake and individual genetic differences on genetic expression represents an opportunity for personalized medicine to expand beyond specialized medical fields like oncology into prevention and management of highly prevalent chronic diseases and preventable cancers that often present to primary care providers. Recent research shows that certain genes, including MTHFR, FTO, and TCF7L2 play a major role in determining whether and how the Mediterranean diet can influence health outcomes, particularly in cardiovascular health. Indeed, the PREDIMED study found that the Mediterranean diet interacts with gene polymorphisms known to play a role in inflammation and atherosclerosis, like COX-2, IL-6, CETP, and APOA2, and, thus, can alter the expression of these genes. Even in a population of high-risk cardiovascular participants, dietary intervention in the form of the Mediterranean diet can modulate the expression of genes tied to inflammation and atherosclerosis.

Beyond influencing gene expression or association, dietary intervention can influence the methylation of certain genes. A pilot studyconducted within the PREDIMED cohort sought to analyze the influence of adherence to the Mediterranean diet on methylation of the TCF7L2 and FTO genes, which are known to be closely linked to stroke and diabetes. Polymorphisms of these genes were strongly associated with methylation levels, and an inverse association was found between adherence to the Mediterranean diet and methylation levels in the TCF7L2 gene. While the optimal level of methylation varies depending on the gene, CpG site, and polymorphism, this study illustrates that dietary intervention do influence methylation of gene sites that are involved in cardiovascular outcomes.

As the UC Davis Center of Excellence for Nutritional Genomics states, “Knowledge gained from comparing diet/gene interactions in different populations may provide information needed to address the larger problem of global malnutrition and disease.” Early studies on the role of the Mediterranean diet and cardiovascular health outcomes indicate that nutrigenomics is already providing data which can be used to address malnutrition and disease. For additional information on nutrigenomics and the role of nutrition as an epigenetic influence, visit MetagenicsInstitute.com and look up the “Gene Speak” series.

Dedoussis GV et al. Effect of interaction between adherence to a Mediterranean diet and the methylenetetrahydrofolate reductase 677C-T mutation on homocysteine concentrations in healthy adults: the ATTICA Study. Am J Clin Nutr. 2004;80(4):849-854.

Llorente-Cortes V et al. Effect of Mediterranean diet on the expression of pro-atherogenic genes in a population at high cardiovascular risk. Atherosclerosis. 2010;208(2):442-450.