The overweight and obesity epidemic in America

Worldwide, obesity rates have tripled since 1975. In 2016, more than 1.9 billion adults 18 years and older were overweight. Of these, over 650 million were obese.1 The National Health and Nutrition Examination Survey (NHANES) is a cross-sectional survey that represents the civilian, noninstitutionalized population.2 NHANES studies are crucial for looking at many aspects of community health in the US, like the worsening epidemic of overweight and obesity. Standardized for age, adult obesity prevalence increased from 33.7% in 2007-2008 to 39.6% in 2015-2016.3

In addition to the current obesogenic environment, there are many factors that play a role in the struggles Americans face managing a healthy weight—socioeconomic factors, genetics, dietary pattern, physical activity level, and environmental pollutants; these are a few of the top explanations elucidated from surveys and studies. But there is evidence to suggest that the issue is more complex and involves gut health, or conversely, the lack of a healthy gut.

Probiotics, prebiotics, and the microbiome

According to the Food and Agriculture Organization of the United Nations (FAO) and the World Health Organization (WHO), probiotics are “live microorganisms which when administered in adequate amounts confer a health benefit on the host.”4

Newer research points to the benefits of providing beneficial microbes with prebiotics, or “substrates that are selectively utilized by host microorganisms conferring a health benefit.” Prebiotics are food for the probiotics, promoting the development of beneficial microbes in the gut and urogenital tract.4 In addition to acting as food for the probiotic microbes, prebiotics are fermented by microbes, producing short-chain fatty acids (SCFA) acetate, propionate, and butyrate, which promote fat oxidation and improve metabolic health.6

Recent studies have examined the differences in gut microbiota between individuals with healthy metabolic systems vs. dysregulated metabolic and endocrine systems, as well as comparing the gut microbes found in healthy weight individuals vs. overweight and obese individuals. The enlightening findings provide renewed hope for individuals who are seemingly “doing it all right”— following doctors’ and nutritionists’ recommendations to move more, eat more vegetables, eat less sugar, and drink more water, but not reaping the full benefits.

A 2016 study compared the gut microbiota of lean vs. overweight and obese men, as well as how the microbiota fermented the prebiotic fibers administered.7 Bacteria belonging to Gemmiger, Dorea, Roseburia, Alistipes, Lactobacillus, and Bifidobacterium genera were found to be highly abundant or stimulated by the prebiotics in the lean group’s gut microbiota, suggesting a potential role in leanness.7 Interestingly, they also found a significant correlation between known, SCFA butyrate-producing strains including B. adolescentis, an unclassified Bifidobacterium, and F. prausnitzii in the fermentation of inulin in the microbiotas of both the healthy weight and obese groups.7 The SCFA propionate was found to be produced in larger amounts among the microbiota of the overweight and obese individuals studied.7

A recent randomized, double-blind, placebo-controlled, parallel-group clinical trial examined the effects of probiotics and/or prebiotics in 85 individuals with blood sugar dysregulation.8 This 2018 study administered probiotic strains Lactobacillus acidophilus, Bifidobacterium lactis, Bifidobacterium bifidum, and Bifidobacterium longum (10 billion CFU for each) with maltodextrin as filler, a synbiotic (prebiotic + probiotic) with the aforementioned probiotics plus an inulin-based prebiotic, or a placebo including maltodextrin for 24 weeks. The major finding of the study was that the synbiotic treatment significantly improved fasting glucose and insulin levels, HbA1c, insulin resistance, and insulin sensitivity compared with placebo.8

In Global Advances in Health and Medicine, Dr. Gregory Plotnikoff shares the many ways in which the health or dysbiosis of the gut microbiome can play a role in the development of overweight and obesity, including synthesis of micronutrients and cofactors, digestion of starches to SCFAs, gut motility, and immune function to name a few.9

Current reviews of the science on prebiotics demonstrate that prebiotics in low doses (<10 g/day) do not impact satiety signals and feelings of fullness; however, inulin found in chicory root may increase satiety hormones cholecystokinin (CCK) and glucagon-like peptide 1 (GLP-1) when ≥16 g/day are consumed.10-11 Dietary fiber is a nutrient gap in most Americans, and a higher fiber diet increases overall prebiotic fiber intake, which can then modulate hunger/satiety signals via volume receptors in the stomach, as well as gut-brain mediated hormone signaling.10-11 Some dietary sources of inulin include agave, banana, plantain, chicory, dandelion, garlic, globe and Jerusalem artichoke, jicama, wild yam, burdock root, and yacón.12

Another hormone to mention is leptin, which is produced by fat tissue (adipocytes) and signals to the brain that there is enough energy stored for normal body functions. The probiotic strain Lactobacillus gasseri BNR17 has shown properties associated with adipocyte inhibition, thereby limiting leptin secretion.13 Also, researchers looking at the gut microbiota of lean vs. overweight/obese individuals found that inulin-fermenting bacterium from the Lactobacillus and Bifidobacterium genera were more abundant in the lean microbiota.7

The puzzle pieces are still coming together…

These recent gut microbiota findings are certainly pieces of the overweight and obesity puzzle many individuals face today. While the field of microbiome research is still relatively young, with much still to learn, together prebiotics and probiotics show promise as critical nutritional factors to support a healthy weight.

Whitney Crouch is a Registered Dietitian with a BS in Clinical Nutrition from the University of California, Davis. She has over 10 years of experience across multiple areas of dietetics, specializing in integrative and functional nutrition and food sensitivities. When she’s not writing about nutrition or educating others, she’s spending time with her husband and young son. She’s often found running around the bay near her home with the family’s dog or in the kitchen cooking up new ideas to help her picky eater expand his palate. 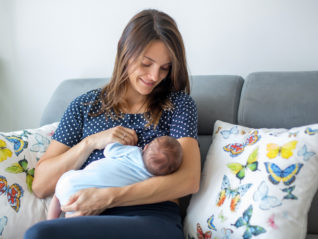