Reversing Cognitive Decline: Not Beyond our Reach It is plain myth that there is nothing that can be done to prevent, slow or even reverse the progress of cognitive decline or Alzheimer’s Disease. The Institute for Functional Medicine held a 3-day international conference earlier this month, attended in droves, diving into the body of evidence that demonstrates this, and we also just really appreciate the work of Dr. Dale Bredesen and his team from the Buck Institute for Research on Aging who are showing that mild-to-moderate cognitive impairment can be successfully improved with a multi-modal functional medicine approach. He is also showing that some patients are able to find full resolution of their symptoms and can return to leading normal and active lives.

A Functional Medicine systems approach is proving it is possible to prevent, slow and even reverse the progression of cognitive decline associated with Alzheimer’s Disease

Alzheimer’s disease (AD) affects 33 million people worldwide. As many as 5.5 million Americans are living with AD; that equates to 1 in 10 over the age of 65 and approximately 200,000 younger than 65, are dealing with Alzheimer’s related dementia. It is estimated by the year 2050 1 million new cases of AD will arise each year. More common than breast cancer, AD strikes women more often than men. The cost of care associated with Alzheimer’s-related dementia has climbed to extraordinarily high proportion of health care spend, thereby significantly impacting patients and their families financially, physically and emotionally. More information regarding the impact AD can be found here.

Reversal of cognitive decline is possible with the use of targeted nutrients, therapeutic diets and comprehensive lifestyle interventions

Once believed to be a disease of the brain, it is becoming increasing understood that AD is a systemic disease affecting the brain. That discrepancy might seem subtle to most but it is revolutionary when it comes to approaches to treatment. Dr. Bredesen’s team of researchers have identified distinct metabolic and toxic imbalances that define six sub groups. While each group possess unique aspects of system imbalances, there is often an overlap of sub groups with disease progression or initial upon presentation. Therapeutic improvement is appreciated as early as 3 months but often requires up to 6 months as remediation of toxic and metabolic systems imbalances seems to follow a threshold effect. Find Dr. Bredesen’s landmark papers on AD including case studies here and here. What follows is a summary of each subtype:

Type 1 is associated with inflammatory processes with an onset typically in the 7th decade.

Type 1.5 is associated with glycotoxicity and the pro-inflammatory perpetuators that result from impaired glucose regulation. The inflammation that results from hyperglycemia incites insulin resistance, disrupting hormone signaling and decreasing trophic factors similar to type two.

Note: types 1, 1.5 and 2 above are associated with hereditary APOE4 gene mutations, which can be identified via genetic testing. See more below.

Type 3 does not carry a familial association nor is APOe4 associated with this subgroup. Rather, this presentation is complicated by chemical toxicant and/or biological toxin exposure and precipitated by significant life stress event(s). This subgroup is often affected in earlier ages with notable challenges associated with word recall, math calculations, organization, as well as depression. Signs and symptoms indicative of chemical/toxin exposure such as reporting a metallic taste in the mouth, increased sensitivity to scents are noted. Reactivation of viral exposure is not uncommon. Heavy metal accumulation and toxicity (Hg, Pb, Cd, As, Al) can contribute to this toxicant induced neurodegeneration. Amyloid-B acts as an endogenous heavy metal binder. Treatment to “break down” amyloid plaques prior to mitigating the driving underlying mechanisms can result in adverse outcomes. Often a significant life stressor precedes what is perceived as sudden, cognitive impairment.

Type 5 is characterized by history of head trauma and is often noted for changes in temperament, anger or loss of empathy.

Types 1, 1.5 and 2 are associated with mutations in the APOE4 gene, which can be tested for

With advances in genetics and genomic medicine we can now be predictive and preventive when it comes to AD. Knowing that prevention of this devastating disease is possible gives meaningful purpose to genetic testing to identify those at greatest risk and intervene early.

Variations of the ApoE4 gene carries the greatest risk.
As many as 7 million people are homozygous ApoE4 which carries a 50 – 90% greater risk for development of AD.

There are three genes considered with respect to AD disease risk associated with the development of cognitive decline. They are referred to as Apolipoprotein E (ApoE) 2, 3, and 4. Each person has two positive alleles associated with each gene. If you carry two positive alleles that is termed homozygote. The combination of one positive and one negative allele is referred to as heterozygote. Individuals with ApoE2 (more often associated with coronary vascular disease risk) or ApoE3 combinations carry the lowest lifetime risk of AD of 9%. Variations associated with the ApoE 4 gene carries the greatest risk but it appears to reduce risk associated with type 3 (toxic) AD. It is estimated ApoE4 heterozygotes (-/+) have a 30% increased risk for developing Alzheimer’s whereas ApoE4 homozygotes (+/+) have a 50 – 90% increased risk. As many as 7 million people around the world are APOe4 homozygous and 75 million are heterozygous.

ApoE 3 and 4 can be assessed through genetic testing available online through https://www.23andme.com/ for a fee. However, this service does not include ApoE2 and has shown slight inaccuracy in reporting. In addition to identifying ApoE gene status, there are several genetic assessments that can aide the multimodal approach and targeted treatment of AD: Amyloid Precursor Protein (APP); Presenilin -1 and -2;  MTHFR; and HLA-DR and -DQ status.

A multi-modal, personalized approach is needed to treat cognitive decline in Alzheimer’s disease.

With over 130 underlying mechanisms as well as gene environment interactions, driving the development of Alzheimer’s, no “one cure” will stop the progression of this disease. Successful treatment plans, such as Breseden’s 36 point ReCODE protocol, essentially a full Functional Medicine approach, rely on a multi-modal, personalized approach to address metabolic dysregulation, hormone imbalances, immune system dysfunction, detoxification mechanisms and social-emotional restoration. While adherence to this comprehensive diet and lifestyle treatment plan requires the dedication of a competitive athlete, reversal of cognitive decline is possible with early intervention and participatory engagement of the individual and supporting care team.

The earlier that treatment is initiated, the greater chance for improvement in cognitive decline associated with AD

6 things you can do now to ensure better brain health and lessen your risk of developing AD:

With the growing incidence of Alzheimer’s Disease and cognitive impairment, risk reduction is relevant to all of us. If you carry the ApoE4 gene, the case for taking proactive prevention steps is even more compelling. If you’re wondering what you can do now to reduce your risk for developing AD, here are our top six priorities:

Take Out Your Cellular Trash…
Getting adequate sleep is imperative. Adequate equates to minimally 7 hours, preferably 8 hours, of sleep each night. Your body’s ability to identify and remove the metabolic waste products that are deleterious to brain function happens while you sleep. Imagine the amount of waste accumulated if your city’s sanitation collectors went on strike for months leaving overflowing garbage bins to collect on the sidewalk. That is essentially what is happening to brain tissue when you chronically deprive your body of adequate sleep.

Investigate and Address Sleep Apnea…
Nocturnal hypoxia is a fancy way of saying, “your brain is being deprived of oxygen while you sleep.” Your brain needs oxygen to thrive and survive. If you suspect you have sleep apnea, or have been prescribed a CPAP machine, consult with your physician to determine if you are getting the oxygen you need while you sleep. For more information on how lack of sleep impacts brain function, click here. More information on how sleep apnea contributes to cognitive can be found here and here.

Get Up and Move…
Reducing one’s carbohydrate load through diet modification and daily exercise is encouraged. Research is finding intermittent activity throughout the day is metabolically more beneficial than sporadic extended activity. If music makes you move download your favorite play list and set a goal to get up and move for one song every hour. Track your progress and see how your memory, speed of processing and focus improves! Evidence linking glycemic control with intermittent exercise can be found here, here and here.

Utilize Intermittent Fasting…
Extend the time between the last meal of the day and breakfast to as much as fifteen hours to optimize ketone production. A mild, controlled ketogenic diet can improve glucose dysregulation. Consult your Functional Medicine doctor and nutritionist (or our team) to learn how to properly execute an optimal ketogenic diet for enhanced brain function. More information regarding ketosis and carbohydrate restriction can be found here and here.

Reduce your toxic load…
Filter water and air, avoid non-stick pots and pans and stain resistant clothing, remove or paint over pressure treated wood, use low volatile organic compound (VOC) paints and home products, opt for composite dental fillings over metals, choose fragrance free products, wear personal protective equipment when handling known toxins, consider exposure to heavy metals found in vaccines as adjuvants, look to natural remedies instead of acetaminophen for pain relief. Awareness of food containment and preparation practices are worthwhile: food and beverages consumed, stored and/or heated in glass is preferable to that in plastic, polystyrene or aluminum. In addition, avoid handling plastic containing products including thermally printed receipts and papers to reduce exposure to bisphenol A, a known endocrine disruptor. Reduce intake of advanced glycation end (AGE) products generated from high heat food preparation (ex. charred meat) and lipid peroxidation (ex. fried or scrambled eggs) can be achieved by opting for moist heat food preparation. Chose organic produce and humanely raised animal products, limit trans fat intake as well as inflammatory foods such as sugar, dairy, and processed grains. Shop the perimeter of your grocer’s market for whole food choices, avoiding food additives and artificial food sources. Fill your shopping cart with a wide variety of colored fruits and vegetables for optimal phytonutrient intake. Your brain will love you for it!  Further information on the bioaccumulation of toxicant exposure can be found here and here.

Use it or lose it…
Train your brain! Download BrainHQ app and build cognitive training into your daily routine. Just 5 to 10 minutes a day three to four times a week can enhance learning, memory, and cognition.

Further information regarding reversing cognitive decline is available at the Buck Institute for Research on Aging.

This article was contributed by Susan Bentsen (BSN, RN, IFMCPc). Susan is a nutrition resident with Dr. Kara Fitzgerald, is currently completing a Master’s of Science degree in Human Nutrition and Functional Medicine at the University of Western States in Portland, Oregon. She holds a Bachelor of Science in Nursing degree and is a licensed Registered Nurse. Dedicated to assisting others find lasting solutions to chronic health issues, she believes diet and lifestyle have a profound impact on health and vitality. Susan combines her knowledge of Functional Nutrition with clinical nursing experience to provide practical strategies to help people of all ages realize their health goals.

This blog was originally posted on www.drkarafitzgerald.com on June 12, 2017. Posted with permissions. A Functional Approach to Asthma and Allergic Sinusitis The Gut-Brain Connection and Mental Health 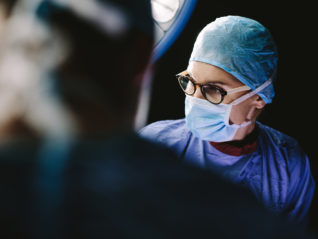 From Bench to Bedside: SPMs for Perioperative Neurocognitive Disorders