In the past, most of the emphasis on treating dyslipidemia and dyslipidemia-induced heart disease such as coronary heart disease (CHD) and myocardial infarction (MI) was directed toward low-density lipoprotein (LDL) cholesterol (LDL-C). The mainstay in the traditional cardiovascular community for treating LDL-C has been to prescribe statins. Herein a two-fold problem emerges. First, many people cannot take statins due to their adverse effects; others choose not to take them. Second, evaluation of LDL has largely been incomplete. Advanced lipid testing now allows us to examine LDL particle number (LDL-P), LDL particle size, and whether the LDL particle has been altered or modified, through oxidation or glycation.1 Advancements in lipid testing have allowed us to look at these three LDL parameters more accurately to determine CHD and MI risk and to target the prevention and treatment of the patient by utilizing precision and personalized medicine.

We now know that LDL-P drives the risk for CHD and MI; in fact, LDL-P is more predictive than any other parameter related to LDL.1 The LDL size is also important. When both the LDL-P and the LDL size are abnormal, the risk is compounded.2 The smaller the LDL particle size, the greater the risk.1,2 The small LDL particle size allows it to penetrate the vascular endothelium and deposit into the subendothelial layer.1 This is where the LDL particle interacts with macrophages. Induces inflammation, oxdidative stress and vascular immune dysfunction that forms lipid laden macrophages, foam cells, and eventually, large lipid plaques that can rupture, and cause acute coronary thrombosis and an MI.1 However,  once the LDL-P is normal then the LDL size  is not as important as a causative lipid parameter for CHD and MI.2

LDL particle modification is the third consideration. LDL, when in native circulation, is typically not atherogenic—it doesn’t increase the risk for CHD and MI.1 However, there are certain circumstances where the native LDL can be disadvantageous and cause CHD. In the setting of inflammation and infections with virus, bacteria, or fungi, the LDL becomes modified through a process called pinocytosis that allows it to be atherogenic and induce the same processes in the subendothelial layer as modified LDL though the macrophage scavenger receptor.3 Typically if the native LDL is really small, it crosses the endothelial layer and becomes modified by oxidation or glycation.1 It’s only after modification that the LDL becomes atherogenic and induces the inflammation, oxidative stress and immune dysfunction in the blood vessel.1 Oxidation and glycation are the two most prominent mechanisms of LDL particle modification.1 The  oxidation of LDL particles is available in clinical labs, but glycation has only been available in research labs, but that will be coming as part of the new clinical evaluation for LDL modification in the near future.

Once the LDL is modified, it advances atherosclerosis in the subendothelial layer where three things occur.1 First is inflammation. The entire subendothelial layer becomes inflamed and can be measured with C-reactive protein and other inflammatory markers such as interleukins and TNF alpha.1 Second is oxidative stress which can be measured with several blood and urine tests.  The  third is vascular immune dysfunction which is due to both T cells and B cells.1 Although we separate those for discussion, they all tend to occur simultaneously.1 Inflammation, oxidative stress, and vascular immune dysfunction set off a chain reaction that increases the formation of foam cells, plaques, and eventually thrombotic events that cause MI.1 There are about 45 different steps that occur from the time the LDL crosses the endothelial lining until it evolves into a plaque that can rupture and induce intravascular thromobis and MI.1 Fortunately, there are drugs and supplements that treat each of these steps. Most of the steps are actually treated with supplementation and not with drugs. So if we develop a program that attacks the mechanisms by which LDL causes atherosclerotic plaque, CHD and MI, we’re more likely to be able to prevent it.

How to approach pathogenic LDL
Based on precision and personalized medicine, the emerging and data-driven way to approach pathogenic LDL is to reduce particle number, increase particle size, and decrease the modification process by interrupting the various mechanisms involved. By doing so, we’re looking not just at LDL levels anymore, we’re looking at mechanisms, and by treating both sides of the equation, we’re more likely to prevent disease before it becomes a clinical event. In fact, if you look at men and women who have MI, many of them have their MI before reporting or being seen for clinical symptoms.4 The statistics vary; somewhere around 50%, maybe up to 70%, of men have their first heart attack before they have any chest pain.4 All the plaque that’s been developed, the responses of inflammation, oxidative stress, and vascular immune dysfunction are occurring in these patients, but they don’t feel it or report symptoms.

The good news is that you can better evaluate risk for  CHD and MI advanced lipid testing,  and perform advanced cardiovascular testing to look at the presence of plaque. For example, you can do coronary calcium score. Additionally, you can do coronary CTA, cardiac MRI and MRA (magnetic resonase imaging and arteriograms and coronary angiograms that look at the plaque that’s developed both in the vascular lumen and also in the subendothelial layer.5,6 The activity below the endothelial layer is crucial because that occurs for decades before the plaque actually encroaches into the coronary artery to cause obstructive CHD. You can have a coronary arteriogram where the lumen looks normal, nice, and clean, with no plaque. But below that subendothelial layer is the “pre-obstructive plaque” that has accumulated and continues to grow  moves into the vascular lumen and induces obstruction and plaque rupture.

The program we need to develop should start with advanced lipid testing to measure the parameters of LDL-P,  LDL particle size, and LDL modification. Also measure the inflammation, oxidative stress and immune vascular markers.  Advanced cardiovascular testing is based on CHD risk factors and CHD risk scoring and analysis, clinical symptoms, family history and other parameters. Then look at what you need to do with nutrition and nutraceuticals to try to fix each of those things. For example, if you have a large number of LDL-P and they’re small, the two best things to treat those are niacin and omega-3 fatty acids, and also getting a patient on a low-carbohydrate diet, particularly one that is low in sugar and refined carbohydrates.7-9 To try to get the total carbohydrates below 30 grams a day is important in reducing the LDL-Pr but also making the LDL size larger so it’s less atherogenic.9

LDL modification is improved with olive oil and nuts, which are monounsaturated fatty acids, and green tea or green tea extract (Epigallocatechin gallate, EGCG), which block modification or oxidation.10,11 Some evidence suggests that carosine may block LDL glycation.

The LDL story is not that complicated, but it’s often misconceived. For example, if you look at LDL number, and it’s 100 mg/dL, you might think, “That’s not a bad number, but what’s in the LDL?” It’s similar to taking the top off the garbage can and looking at what’s inside—different kinds of LDL, different mixtures of LDL as opposed to just looking at the garbage can, which would represent the entire amount of LDL. Unless you know what’s in the LDL, i.e., the particle number and particle size, you really can’t predict the CHD and MI risk, and you really can’t even decide what the best treatment is.

There’s not one single agent that will treat all the different types of LDL issues. The best strategy is to develop a comprehensive program, perform advanced lipid testing, apply clinically-validated nutrition and supplements, and then reevaluate at two to four months—and observe if LDL parameters are improving, and then adjust your treatment program around the abnormalities. If you get LDL-Pnumber down to the lowest level based on the lab you’re looking at, you’ve reduced risk for MI.12

A final consideration is High Density Lipoprotein (HDL). In precision and personalized medicine, we’ve got to treat both LDL and HDL in order to get the best results because, as we cover in the previous article on HDL, LDL is the garbage, and HDL is the garbage collector. Triglycerides are part of the lipid story as well. Triglycerides are treated similarly to LDL cholesterol. The two best treatments are niacin, omega-3 fatty acids, and also monounsaturated fats.7,8,10 The treatment for all of these dyslipidemias turns out to be very similar, which makes it easier for the patient and increases compliance.

Mark Houston, MD, MS, FAHA, FASH, DABC is a highly recognized cardiovascular and hypertension specialist, serving as a physician at St. Thomas West Hospital in Nashville, where he holds several leadership positions including Director of the Hypertension Institute and Vascular Biology, Medical Director of Clinical Research, and Section Chief for the Division of Nutrition. Dr. Houston cofounded the Hypertension Institute, which is one of the leading institutes in the US for hypertension treatment. An American Society of Hypertension (ASH) specialist and Diplomate of the American Board of Cardiology, Dr. Houston is also a Fellow of the American Society of Hypertension (FASH), the American Heart Association (FAHA), Internal Medicine (ABIM), American College of Nutrition (FACN) and Anti-Aging Medicine (ABAARM). Dr. Houston received his medical degree from Vanderbilt University. He also obtained two master’s degrees, in Human Nutrition and Metabolic Medicine and Human Nutrition, from the University of Bridgeport and University of South Florida, respectively. 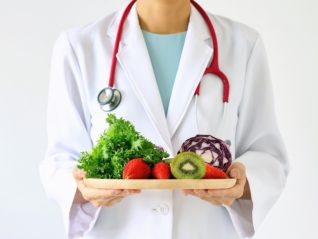 Dealing with Dyslipidemia via Targeted Nutrition