Exploring our body’s homeostatic regulator and ways to facilitate balance The endocannabinoid system is a fascinating network involved in regulating many physiological, homeostatic, and cognitive functions—including appetite, immune function, pain, metabolism and energy balance, stress response, anxiety, mood, fertility, pregnancy, pre- and postnatal development, memory, and neurogenesis, as well as the well-known pharmacological effects of cannabis.1,2 In our developing understanding of network medicine, it’s important as clinicians to understand that the endocannabinoid system plays a role far beyond getting high and impacts conditions we see every day, including obesity, prediabetes and diabetes, and cardiovascular disease.

There is a long history of scientists gaining insight into human physiology by studying how plants interact with our bodies. Cannabis is a prime example. By isolating and mapping the chemical structure of bioactive compounds in the Cannabis sativa plant, researchers discovered a new biological system within our bodies known as the endocannabinoid system.

The endocannabinoid system is an important physiological system involved in regulating and balancing numerous functions and processes in the human body, including but not limited to stress responses, pain sensations, mood and memory, and immunomodulatory functions like attenuating inflammation.1,2

eCBs are produced on demand

The eCBs are produced and released on demand from phospholipid precursors in response to a stimulus and/or need, making the endocannabinoid system capable of adapting quickly to changing conditions. Their release activates cannabinoid receptors, leading to a variety of physiologic processes involved in maintaining homeostasis.2 CB1 receptors are primarily localized in the central nervous system, and their activation results in robust suppression of neurotransmitter release into synapses; CB2 receptors, on the other hand, are mostly located in immune cells and, when activated, can modulate immune cell migration and cytokine release.6,7 However, these receptors are present in several other cell types. For example, the CB1 receptor is also present at lower concentration in a variety of peripheral tissues including sensory nerve endings where its activation impacts pain sensation.1,2

Our bodies make eCBs in response to several physiological and pathophysiological factors, and their activation leads to different biological processes. For example, when we are hungry and presented with food (prior to consumption), circulating AEA levels increase, stimulating appetite and food intake.8

The levels of eCBs in our body increase in response to positive stimuli such as exercise and social interactions.8,9 It has been shown that moderate-intensity exercise (but not low- or high-intensity exercise) can significantly impact circulating endocannabinoid levels.10 For example in healthy cyclists following a 90-minute exercise period, a positive correlation was observed between circulating AEA and brain-derived neurotrophic factor (BDNF) levels.11 Preclinical studies have shown that the effects of exercise on spatial memory and BDNF expression depend on CB1 receptor signaling.8 Together, these data suggest that, at least in part, the effect of exercise on cognitive function and mood could be mediated by the endocannabinoid system.

The function of eCB signaling during stress is to buffer the stress response and dampen negative emotions.6 Exposure to acute stress induces bidirectional changes in eCB levels—reducing AEA levels and leading to the activation of the hypothalamic-pituitary-adrenal (HPA) axis and stress-related behaviors; in contrast, the increase in 2-AG levels in response to stress contributes to the suppression of the HPA axis, therefore, restoring homeostasis.6 However, impairment in the endocannabinoid system as a result of chronic stress may correlate with dysregulated stress-related behaviors like anxiety and depression.6

Another pathophysiological condition under which eCB signaling is altered is inflammation.8 An increase in circulating eCB concentrations has been observed in patients with cirrhosis, endotoxic shock, chronic hepatitis C infection, congestive heart failure, and atherosclerosis.8 eCBs are extensively involved in regulating the immune response by activating CB2 receptors, which are mainly expressed in human lymphocytes (B and T cells), macrophages, and, to a lesser extent, neutrophils.12

CB2 receptor activation is associated with a reduction in proinflammatory cytokine release and enhancement of anti-inflammatory cytokines.7,8  Therefore, eCB signaling may function as a feedback system to dampen inflammation, and dysregulation in the crosstalk between the immune system and endocannabinoid system has the potential to negatively influence the body’s immune response.13

What if the endocannabinoid system is out of balance?

An imbalance in eCB “tone”, which is a reflection of eCB levels in the brain and other parts of the body, how they are produced, how they are broken down, and how many CB receptors a person has, could be associated with various disorders.14

CED has been suggested to contribute to the etiology of certain conditions such as pain and psychiatric disturbances, with the greatest evidence present for migraine, irritable bowel syndrome, and fibromyalgia.14

Too much eCB tone

On the other hand, an overactive endocannabinoid system is associated with conditions like obesity, metabolic syndrome, and hepatic fibrosis.17

Strategies to support the endocannabinoid system

Certain lifestyle choices and strategies employed in integrative or Functional Medicine may help support the endocannabinoid system functions. The following approaches have been suggested to naturally promote the body’s own homeostatic modulator:4

Several synthetic modulators of the endocannabinoid system (i.e., pharmaceutical agents) have been studied and used for a broad range of diseases; however, many have been are associated with serious, unexpected complexities.20 For example, rimonabant—a synthetic antagonist of the CB1 receptor used as an anorectic antiobesity drug in Europe in the early 2000s—was withdrawn from the market due to severe psychiatric adverse effects.21  There is an ongoing need to identify methods to enhance the endocannabinoid system without drugs or medical procedures. Nutritional therapies leveraging naturally occurring cannabinoids found in foods and plants such as PEA, phytocannabinoids, and terpenes appear to be promising candidates due to their high safety and low adverse effects profiles.17

Phytocannabinoids, naturally occurring cannabinoids found in plants like cannabis, have the ability to modulate a variety of physiological systems influenced by the endocannabinoid system as well as support its overall functioning. Cannabis sativa is an herb containing hundreds of bioactive compounds including phytocannabinoids and terpenes.23 The most well-known phytocannabinoids in cannabis are ∆9-tetrahydrocannabinol (∆9-THC) from the marijuana species and cannabidiol (CBD) from the hemp species. Both phytocannabinoids have beneficial properties with clinical relevance; however, ∆9-THC induces psychoactive effects, while CBD does not.24

Phytocannabinoids within the cannabis plant have specific and complementary effects on the endocannabinoid system either by interacting with cannabinoid receptors or inhibiting enzymes that are involved in breaking down endocannabinoids.25 For instance, CBD exerts anti-inflammatory activity by suppressing FAAH activity, thereby increasing concentrations of the anti-inflammatory endocannabinoid AEA.26 Given the promising biochemical, physiologic, and preclinical data on CBD, several clinical studies have evaluated its effects in the treatment of conditions like movement disorders, psychosis, PTSD, anxiety, and sleep disorders.25-27

Terpenes are fragrant oils common to human diets and share a precursor with phytocannabinoids. They can be found in citrus fruit rinds, mango, thyme, black pepper, peppermint, and cannabis, to name just a few. 23,24 β-caryophyllene, one of the known terpenes found in numerous plants and spices such as pepper and cloves, has been shown in preclinical studies to exert anti-inflammatory and antioxidant effects through activation of the CB2 receptor.29  Another known terpene is D-limonene, which is a common terpene found in lemon and other citrus fruits. Both preclinical and clinical studies have shown the effects of D-limonene on gastroesophageal reflux, reducing anxiety and depression, and protection against dermatophytes.24

In addition to phytocannabinoids and terpenes, the effects of eCBs can be enhanced by naturally occurring compounds such as PEA that increase their bioavailability and thereby prolong their action.22,30 PEA is known to exert anti-inflammatory properties, as well as neuroprotective and antinociceptive effects via multiple mechanisms.5,31 Research suggests that some of PEA’s action is mediated by a phenomenon referred to as  the “entourage effect.” This mechanism of action is based on the ability of PEA to inhibit the expression or activity of FAAH, thereby increasing levels of AEA and 2-AG, which activate CB receptors and the transient receptor potential vanilloid receptor type 1 (TRPV1) channels.5,31 In addition, PEA can potentiate AEA- or 2-AG-induced TRPV1 activation and desensitization, contributing to its anti-inflammatory or analgesic actions.30 Another possible mechanism to its entourage effects is related to an indirect action of PEA—upregulating CB2 receptor expression mediated by PPAR-α.32

PEA is naturally produced in many plants and foods like egg yolk, peanut oil, or soybean lecithin, as well as in different tissues, cells, and body fluids such as the liver, muscle, central nervous system, and human breast milk.5,22 Like endocannabinoids, PEA is produced in the body on demand from membrane phospholipids, and its concentrations can be altered by pathological states, such as pain and inflammation, indicating its function as a self-repairing mechanism in the body.27 The effects of PEA as an anti-inflammatory and antianalgesic agent have been studied for various conditions from chronic pain syndromes (e.g., fibromyalgia, sciatic pain, diabetic pain, low back pain, carpal tunnel syndrome, poststroke, and multiple sclerosis-related and pelvic pain) and Parkinson’s disease to influenza and cold in nearly 4,000 people.33,34

OEA, another endocannabinoid-like lipid, is synthesized in the small intestine, neurons, astrocytes and adipose tissue, and its biological functions are mainly mediated by interacting with PPAR-α and TRPV1.30 The main functions of OEA are summarized in controlling food intake, reducing inflammation, and providing neuroprotective actions.30 Recent clinical studies in subjects with obesity have shown that OEA reduces serum proinflammatory cytokines, oxidative stress, hunger, and the desire to eat.35,36 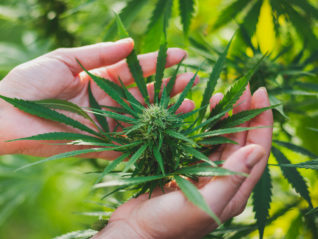