The Keto Diet: Nuance in Practice

While always starting with optimizing food choices—food first—the discussion shifts to practical, strategic solutions to address nutrient gaps. For keto patients, Rob leverages targeted supplementation to address insufficiencies, including magnesium, fiber, medium-chain triglycerides (via MCT oil), and exogenous ketone salts. Dr. Minich underscores the issue of macro- and micromineral deficits, not only in keto patients, but in the general population, too. The supplementation discussion touches on a plantcentric ketogenic diet, as Dr. Silverman mentions the utility of algal oil supplementation to deliver omega-3 fatty acids in that regimen.

Dr. Silverman comments that the clinical literature on the ketogenic diet most relevant to his patient population includes its role in weight loss and mitigating cardiometabolic dysfunction, cognitive decline, and concussion. However, individualized considerations or even caution with keto is prudent, based on certain genotypes or predispositions. Specifically, Dr. Silverman recommends against a keto approach for patients postcholecystectomy and how patients with the ApoEƐ4 gene may benefit from a mildly ketogenic, plant-based approach.

Drs. Minich and Silverman debate a newer area of keto research exploration: Female and male differences in responding to keto. Dr. Silverman mentions a preclinical study (mice) in which the keto approach did not work as well in females vs. males, with hormones (especially estrogen) likely playing a role in this difference. In practice, Rob utilizes an estrogen detoxification protocol prior to implementing a ketogenic diet in his premenopausal female patients. He explains the unique role of specific bioactives (i.e., sulforaphane) in cruciferous vegetables in supporting estrogen detox pathways.

The utility of keto in athletes is discussed next, with Dr. Silverman referencing several supportive mechanisms—fat is a richer energy source than carbohydrate; ketosis is linked to more ATP production; ketone bodies like beta-hydroxybutyrate [βHB] function as anti-inflammatory molecules and brain fuel. The significance of hydration and electrolyte replenishment are highlighted, which naturally transitioned into an important aside on the “keto flu” phenomenon, including mechanisms, signs and symptoms, and the role of electrolytes.

Time-restricted feeding is investigated next, in a keto context. Dr. Silverman is a proponent of restricting the window of eating to 12 hours, balanced with a “fasting” period of 12 hours, having observed that this approach facilitates success alongside the keto approach in his practice. Lastly, tangible tips on transitioning out of keto are presented. Dr. Silverman describes the incremental weaning method he uses to transition patients out of keto and presents the Mediterranean diet as a stellar, evidence-based option to transition patients onto for the long term. As always, the importance of individualizing the treatment in each patient is paramount. 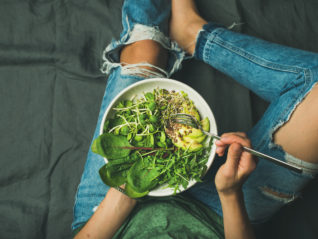 A Quick-Start Guide to the Ketogenic Diet